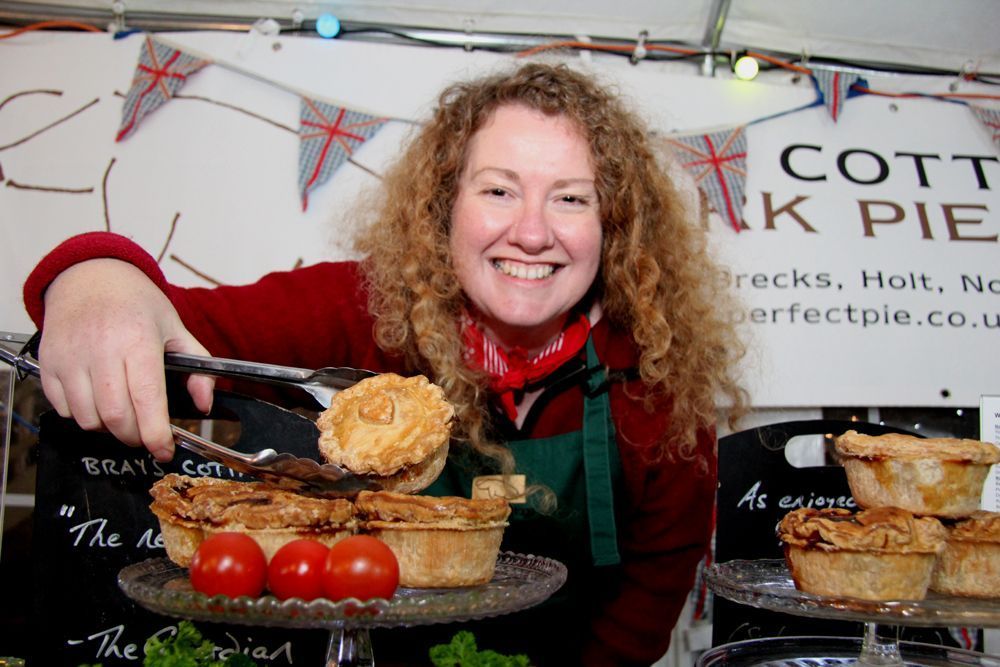 This week we head over to rural Norfolk to catch up with Sarah from Bray’s Cottage Pork Pies.

Bray’s Cottage make the most perfect pork pies I have ever tasted. Big believers in the slow food philosophy the pork pies that come from Bray’s Cottage are truly delicious. We’ve been finding out from Sarah just why they are so damn good!

Sarah has always been a foodie, her mother was a great cook and so Sarah used to spend time playing in the kitchen and experimenting with odd ingredients and trying increasingly more complicated recipes. After a few years of working in the city she’d had enough of being in other peoples offices and decided to set up her own business and living in the incredibly beautiful North Norfolk that is where she wanted to stay and where she wanted to work each day. So in 2007 Sarah started the business in a very small way, borrowing kind people’s commercial kitchens.

Having grown up in the Midlands pork pies were a frequent feature at tea time, and there were always things she felt could be improved on. For instance she always hated the jelly, so when she started making her own she definitely left the jelly out and made sure they were full of meat and there was no gap. She put a brilliant local smoked bacon in with the fresh pork (really good cuts) rather than cured, bright pink ground down meat. And her seasoning is much more complex than the traditional peppery pork pie. And the pastry is relatively thin too! Perfect.

People loved the pies and they started selling quite a few and getting great reviews in the national press. They took on a unit in a converted flint barn overlooking the stretch of coast between Cley and Blakeney. They’ve now expanded to three small units on the same site, one for making the pies, the original one for baking the pies and a third long, beamed barn as an office which swallows fly into in the summer!

Bray’s Cottage mainly sell to independent delis, farm shops and pubs around the UK, they also do a few markets and events in Norfolk – which means they get to chat to the end customer and keep in contact with their thoughts. They also do mail order, mostly at Christmas and Father’s Day and they make extra special celebration pies to order with special messages on which they send around the country. They are also famed for their big, spectacular four-tiered wedding pork pies which people order instead of wedding cake. Brays Cottage have been featured in publications around the world with the wedding pies and to Sarah’s great pride were featured in Country Living!

Sarah thinks it’s important people buy from independent producers like Bray’s Cottage firstly because of the taste – once you get used to having food made carefully by people whose business it is, so who really care, you get to expect the levels of flavour and quality that you get from them.

Also especially in a rural area like where Bray’s Cottage is then it’s great for the economy, it creates proportionally more employment, small businesses tend to buy good and services from other small businesses and so you get a knock on effect. And great food can often create another layer of character to an area. If you think of regional food in France and Italy, people are starting to travel to Norfolk because they’re hearing about the brilliant small scale food here. 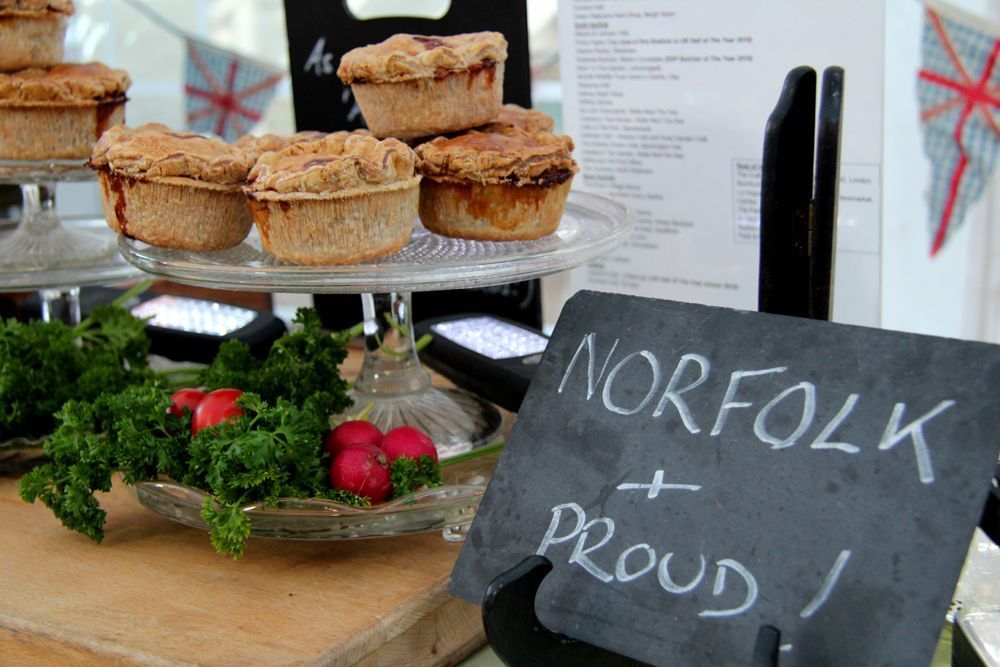 Bray’s Cottage have a routine through the week, three baking days and a making day, which they find really nice as it gives the week structure. Then all the unexpected, unplanned things fit in around that! When they first started they had one part time person helping and gradually that’s expanded so over the summer, their busiest period they’d ten people in the business as well as herself and her husband Derek, who went into the business a few years ago.

They make a variety of flavours of pork pie, onion marmalade, chilli, chorizo, plain, all day breakfast (with quails egg, bacon and baked beans) and seasonal ones such as wild garlic, apple (with the apples coming from Sandringham), lemon, parsley and garlic and fig and orange. They’ve also been experimenting with pork and venison and another with piccalilli – after seeing a supermarket making a not great pork and piccalilli pie a friend though they could improve on it and challenged them.

For the future of Bray’s Cottage Sarah hopes it will be more of the same. They like the simplicity of having one product (although over the last couple of years they’ve been making an increasing amount of sausage rolls too)and there are still a lot of wonderful delis, pubs, farm shops and cafes serving say, great specialist cheeses but making do with no-so-great pork pies that they just buy from their wholesaler who buys from a factory. Her mission is convert them to something better, their customers deserve the best! 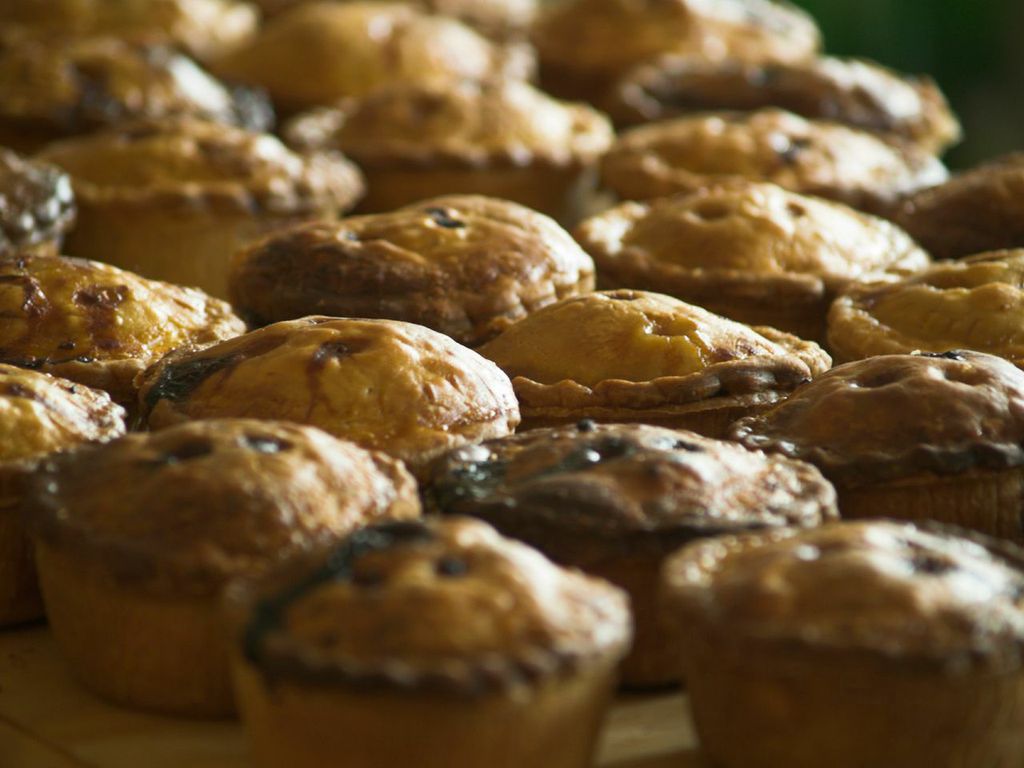 Bray’s Cottage have sold pies to a lot of celebrities over the years, Sarah keeps the names confidential. They’ve won Great Taste awards and various national taste test but her highest accolade was when Heston Blumenthal chose the nation’s best pie makers to treat to a spectacular banquet for his Chanel 4 programme and she was asked along. During a break in filming, one of the researchers introduced her as said to Heston “this is Sarah, she makes Bray’s Cottage Pork Pies” and Heston said “Yes – I Know”. He’d watched a video Sarah had been asked to make of creating a UK shaped pie by a magazine and remembered her – she was so proud!

To find your nearest Bray’s Cottage stockist check out the website. You can also keep up to date with all the Bray’s Cottage news over on Twitter @Brays_Cottage

When it comes to Bray’s Cottage pork pie we can’t resit them! Here’s our gorgeous wintery salad recipe that goes perfectly with any flavour pork pie you choose.

We are always looking for fabulous foodies to feature on our Meet the Producer series – just get in touch via email if your interested.