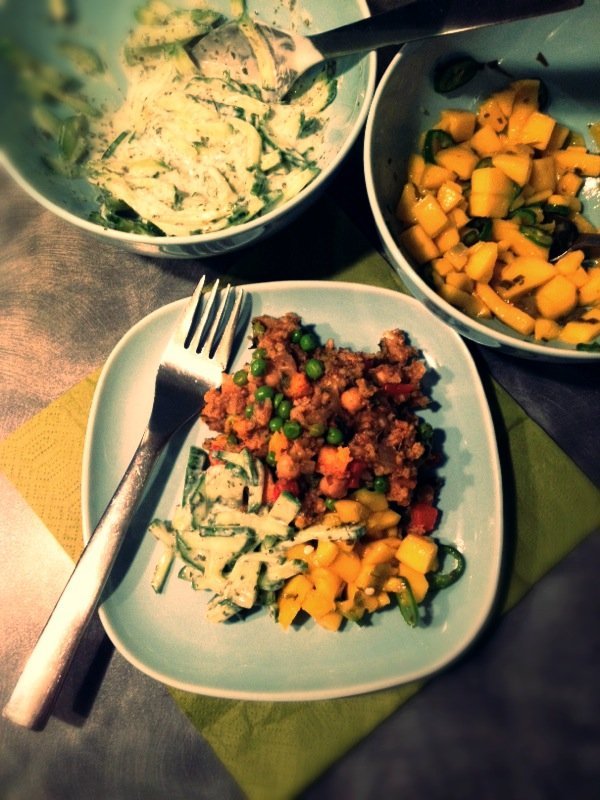 This recipe was created as part of a challenge by Sainsbury’s to cook great family food using their Basics range. The slow cooker vegetable biriyani is a great economical and easy family recipe. I made this into a mildly spiced vegetable biriyani so it would be suitable for my young children.The biriyani is loaded with vegetables and I added a few side dishes to make it a bit more special as a weekend dinner. The food used in the side dishes were things we had in that needed using up. So there is a really quick mango salsa simply diced mango tossed with fresh green chillies and sesame oil. And a basic cucumber raita, just cucumber strips tossed in yogurt and chopped mint. You could make this meal go further still by serving with warmed naan bread or some Bombay potatoes. I use a slow cooker with removable pan so I can start things off on the hob and then just place the pan in the slow cooker base to finish cooking.

Disclaimer – The Sainsbury’s Basics products used in this recipe were provided free of charge by Sainsbury’s.

What did we think of them? The fresh onions and peppers were just fine taste wise – appearance wise a little wonky but nothing that impacted on taste. The frozen peas were also fine taste wise – appearance wise a little larger and perhaps a bit firmer than the more expensive ranges but they worked well in the biriyani. The Sainsbury’s Basics rice – as stated on the packet does contain broken pieces – the rice cooked well enough in the slow cooker – it was a little fluffier than I normally like but again nothing that would stop me eating and enjoying it. This whole dish was hugely popular with the kids too!